As you know, previously, AutoDeploy and Image Builder played with PowerCLI only. Things have changed in vSphere 6.5 and now you have a possibility to build a custom image within the vSphere Web Client as the new GUI allows you to do that. So, today In the lab – How to create a custom ESXi 6.5 ISO with VMware Image Builder GUI. There will be quite a few screenshots, but I like doing those. The fact that VMware now has a GUI tool which is not very difficult to master is really cool.

So in my lab, I was able to add custom drivers and remove drivers from the original VMware ESXi 6.5 ISO. The resulted image was then exported as ISO or it can be used for AutoDeploy scenarios. You might also need to create a custom ESXi 6.5 ISO when you need to integrate other than the stocked VMware drivers, say you have a NIC card which has it’s own drivers.

The lab has been now fully upgraded to vSphere 6.5 and I’m running vCenter based on Linux (vCenter server Appliance) VCSA 6.5. I had to build a custom ISO which had new drivers for the LSI 3008 storage controller (for vSAN HCL) and the X710-DA2 10GbE NICs. Then only I could upgrade my hosts.

And also the upgrade of the vCenter:

So today I’ll show you the steps which are necessary to configure and use the new ImageBuilder GUI and create a custom ISO via this tool. Now, this is not the only way to do it. You might know other methods, tools. I know also the free tool from Andreas Peetz (v-front.de) called ESXi customizer (unsupported no longer, but which has become a PowerShell script).

For the Auto Deploy GUI to be visible in vSphere Web Client, both the Image Builder and Auto Deploy services must be running. You should have the ImageBuilder Service up and ruuning…

Click the Autodeploy icon and you’ll see the initial welcome page. You’ll want to close this one I’m sure…

There are different TABS:

For now, we’ll be just playing with the Images and depots. Not with the deploy rules, deployed hosts or discovered hosts.

Add a software depot first. Choose Custom depot (we will be importing the VMware-ESXi-6.5.0-4564106-depot.zip file into it).

Next thing. The drivers. I had to import my two drivers. First one is the new driver for my x710-DA2 10GbE Intel NICs….

The next step is to start the wizard and create an Image Profile.

Put some meaningful name and description….

Select the software packages. In my case, I had to pick the i40e and the one for the LSI 3008. You doing it by drop down the menu and select the check box. Rinse and repeat for all your drivers.

Next, select the VMware ESXi 6.5 zip you have uploaded and deselect the drivers you want to exclude. In my case I don’t want the old drivers. I don’t want to to have both drivers on my ISO….

Then hit the Finish button.

And we have our new profile….

Note the other buttons (Edit, Delete, Clone, Compare to, Move to or Export…). The Export will interest us today.

You can generate ISO or Zip ….

via your web browser….

That’s all folks for today. We have configured VMware Autodeploy service and then we tested the new VMware vSphere image builder GUI. Yes, VMware has done a great job in this relase. We no longer have to be dependent on third party utilities for managing ESXi images. 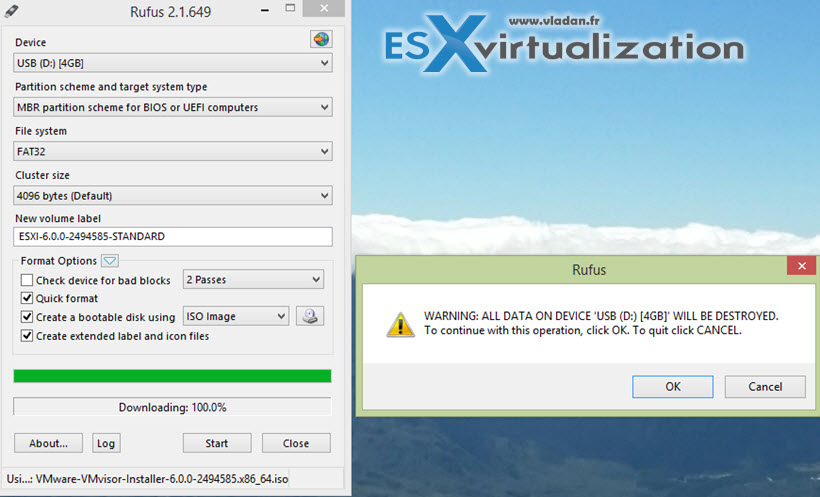